Home › Abortion › I hate to put a damper on the Susan G. Komen Foundation’s ‘reversal,’ but…

I hate to put a damper on the Susan G. Komen Foundation’s ‘reversal,’ but… 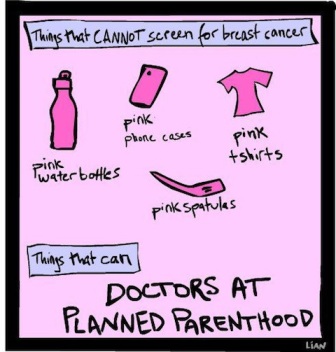 I was at work when I opened my email and saw that the Komen Foundation has ‘reversed’ its decision on Planned Parenthood funding. I could scarcely believe my eyes. Then I read the statement by CEO and Founder Nancy G. Brinker on the Komen site and I realized that it was yet again ‘lazy media syndrome.’ Here’s what the statement reads, and this is directly off the Komen site:

DALLAS – February 3, 2012 – We want to apologize to the American public for recent decisions that cast doubt upon our commitment to our mission of saving women’s lives.  The events of this week have been deeply unsettling for our supporters, partners and friends and all of us at Susan G. Komen.  We have been distressed at the presumption that the changes made to our funding criteria were done for political reasons or to specifically penalize Planned Parenthood.  They were not.

Our original desire was to fulfill our fiduciary duty to our donors by not funding grant applications made by organizations under investigation.  We will amend the criteria to make clear that disqualifying investigations must be criminal and conclusive in nature and not political. That is what is right and fair.

Our only goal for our granting process is to support women and families in the fight against breast cancer.  Amending our criteria will ensure that politics has no place in our grant process.  We will continue to fund existing grants, including those of Planned Parenthood, and preserve their eligibility to apply for future grants, while maintaining the ability of our affiliates to make funding decisions that meet the needs of their communities.

It is our hope and we believe it is time for everyone involved to pause, slow down and reflect on how grants can most effectively and directly be administered without controversies that hurt the cause of women.  We urge everyone who has participated in this conversation across the country over the last few days to help us move past this issue.  We do not want our mission marred or affected by politics – anyone’s politics.

Starting this afternoon, we will have calls with our network and key supporters to refocus our attention on our mission and get back to doing our work.  We ask for the public’s understanding and patience as we gather our Komen affiliates from around the country to determine how to move forward in the best interests of the women and people we serve.

We extend our deepest thanks for the outpouring of support we have received from so many in the past few days and we sincerely hope that these changes will be welcomed by those who have expressed their concern.

The important part of this statement is in bold and underlined here (and these are my editor’s marks; not Komen’s). What it essentially means is that Komen may not fund them in the future. So, the question here is: Is this truly a ‘reversal’ or is it just a PR ploy to stop the bleeding (and the outrage at Komen has been palpable). Before we jump on the Komen bandwagon, I say we wait until Komen puts its money where it’s ‘mouth’ is. To me, this is just an organization under fire trying to quell the public outrage, preserve its donors, its associations with the Race for the Cure, and its good name. Personally, I don’t believe that the Komen Foundation ever foresaw the reaction it received when it decided to de-fund Planned Parenthood. If the media had bothered to read between the lines, it would seem suspect. To me, it says that the Komen Foundation can find a way to deny Planned Parenthood down the road.

As People for the American Way (PFAW) pointed out in an email I received late this afternoon, if Komen was so concerned about organizations under investigation, why does it have a partnership with Bank of America and why did it give a $7.5 million grant to Penn State, which is under federal investigation?

Until the Komen Foundation delivers on its suspect statement, I suggest everyone donate directly to an organization that truly cares about women’s health. That is Planned Parenthood. Twenty percent of women in the United States have visited Planned Parenthood. They provide free or low-cost breast exams to women who otherwise cannot afford these services. Planned Parenthood provides 750,000 breast exams each year. On the other hand, Nancy Brinker has given literally hundreds of thousands of dollars to members of the GOP who have been waging a war on women. In my mind, that is an oxymoron, and the mark of an organization that cannot be trusted with women’s lives.

Like Loading...
‹ Susan G. Komen for the Cure crosses the line and puts right-wing politics ahead of women’s health
Scott Lively spreads his own brand of hate ›