Home › Bullying › Guilty as Charged: It’s Time to Put Bullies in Their Place

Guilty as Charged: It’s Time to Put Bullies in Their Place

Bullying: unwanted, aggressive behavior among school aged children that involves a real or perceived power imbalance. The behavior is repeated, or has the potential to be repeated, over time. Both kids who are bullied and who bully others may have serious, lasting problems.

There is no question that bullying has become a favorite pastime of America’s school-age children, on every grade level from grammar school to college. It’s pretty clear that we are no longer a society where we treat each other with respect without consequences. All you need to do is take a look at statistics on bullying:

Children and young adults can be bullied for many reasons, race, religion, height, weight…even their financial status. Regardless of the reason, it is clear that LGBT students face ever-increasing bullying and a host of safety concerns:

Overall, bullying is literally at epidemic proportions. That’s why the guilty verdict in the Rutgers University webcam spying case should be celebrated. If we are not going to become a more inclusive, tolerant society — and it’s clear we’re not progressing in that direction — then bullies must be held accountable. It just may make them think twice before victimizing others.

Guilty of invasion of privacy, hindering apprehension, evidence tampering and a hate crime 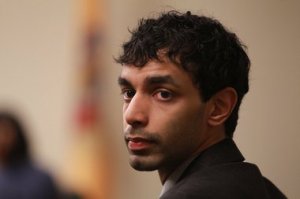 On May 16, Dharun Ravi, now a former Rutgers University student, was convicted on all 15 charges leveled against him for using a webcam to spy on his roommate in an intimate moment with an older man. Ravi then sent out Tweets and text messages encouraging others to watch. Cyberbullying is nothing more than high-tech bullying, with individuals using technology to harass, threaten, target or embarrass another person. That is what Ravi did to his roommate, Tyler Clementi, who jumped to his death from the George Washington Bridge on September 22, 2010 – three days after the webcam incident. Not only was Ravi convicted of invasion of privacy and tampering with evidence, but he was also convicted of a hate crime. According to the New York Times, the “verdict is poised to broaden the definition of hate crimes in an era when laws have not kept up with evolving  technology.”

Of course, the verdict has already set off debate about the issue of hate crimes. Some argue that, even though Ravi was not accused of Clementi’s death, he was being punished for it. In addition, the experts pulled out what I like to call the ‘boo hoo’ defense, arguing that the verdict would only serve to ruin another young life. Ravi’s attorneys said the verdict criminalized simple boorish behavior. Let’s get this straight: Targeting another person in a malicious manner that results in another’s suicide is not simple boorish behavior. By any definition, it’s bullying.

It should be noted that Ravi turned down a plea agreement that would have avoided jail time. Under the terms of that plea agreement, Ravi would have been put on probation, required to perform 600 hours of community service, and receive counseling. Instead, Ravi could serve five to 10 years, and he could also face deportation to his native India. Meanwhile, he remains free on bail until sentencing on May 21. While he was not convicted of murder, his actions resulted in a loss of life, something that happens far too often in our society. While the conviction breaks new ground and will face scrutiny, I believe it is appropriate. Ravi’s lawyers have stated that they will appeal.

Ravi exposed Clementi’s personal life not once, but twice, putting to rest whether or not this was just a college prank. He tweeted that he saw Clementi “kissing a dude.” Then, he invited others to watch when Clementi invited the man back again. Records show that Tyler Clementi had requested a room change online, and a resident assistant testified that he had received a complaint from Clementi prior to his suicide.

Ravi was also found guilty of tampering with physical evidence for deleting tweets relevant to the investigation in an attempt to cover his tracks. He also wrote and posted a false tweet. The witness tampering guilty verdict stems from his attempt to influence what Molly Wei, a friend who also witnessed the Clementi video, told police. A breakdown of all the individual charges against Ravi and the resulting verdicts can be seen here.

According to juror Bruno Ferreira, the jury was not in conflict during deliberations. Said Ferreira, “I’m actually satisfied with the verdict. It was very hard, very difficult. Nothing means we would be personally biased toward the defendant. You have to look at all the facts and the evidence. That’s why you have 24 counts guilty and 11 not guilty. Witness statements and the evidence were not there to prove those,” he said. “This was very difficult, but it was a really good experience. You feel like justice has been served.”