Home › Armageddon › Crazy is As Crazy Does: Wealthy Doomsday Whack Jobs Plan to Hunker Down in Style

Crazy is As Crazy Does: Wealthy Doomsday Whack Jobs Plan to Hunker Down in Style 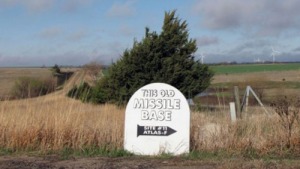 Proving once again the 1% has too much goddamned money for their own good, wealthy doomsday preppers (aka, whack jobs) are now planning to weather the apocalypse in style.Yes, folks, they are purchasing posh doomsday condos inside abandoned missile silos deep beneath ground (about 174 feet down) in Kansas. An entire floor will cost you $2 million; half a floor $1 million. So far, four buyers have anted up about $7 million. There’s nothing like a few paranoid billionaires to stimulate the economy.

Here’s how the luxury digs are described on the website:

“This project has the advantages of letting the members own a piece of history, the coolness of a missile silo, the protection of a nuclear hardened bunker, and the features of a luxury condo.”

I’m not sure if the ‘coolness’ part is because it’s cool to live in an abandoned missile silo, or if it’s cool temperature wise. But, no matter.

The billionaire bunkers are the brainchild of developer Larry Hall. So far, three and a half units are sold, two contracts are pending and only two units are remaining in the first silo. Hall even bought one for his family, worried that solar flares are going to knock out the grid. For now, it’ll be a vacation home. (A vacation home????) The 1% need not worry. Once Larry’s first silo fills up, he’s got options on three others. What are these billionaires paranoid about? Oh, how about a pandemic? Earthquakes? Terrorism? Food shortages? Somewhere in there, I also think they’re pretty scared that the rest of us – you know, the 99% – are going to revolt and make things ugly for them. I’ve got a new idea for a bumper sticker: Occupy a Silo.

Larry’s a hell of a salesman too. There are three basic factors in closing a sale: Creating fear, uncertainty and doubt. I know. I spent more than 30 years in marketing. He helps himself out on his site with a section called ‘News You Can Use.’ Here we have all kinds of calamities listed to cultivate that paranoia. Things like “Severe Storms in Six States Leave 300 Dead,” “Massive Tornado Strikes Mississippi,” and “Glaciers Melting Faster Than Previously Thought.” (Obviously, this is one instance when climate deniers are not welcome.) Helping him out are shows on cable dedicated to doomsday preppers, most notably on the National Geographic channel. Remember when National Geographic had some kind of credibility?

All the bases are covered. Obviously, there are no views 174 feet down, but there are electronic windows that allow you to select any scene you want. Paris? London? The Alps? Manhattan? Mount Whitney? You name it. There will be an indoor farm to grow enough fish and vegetables to feed 70 people (how many did Christ feed on five loaves and two fishes?), and enough dry goods to feed them for five years. Energy will be provided by conventional means, windmill power (I’m guessing solar is out) and generators. Shit, we can’t get these asshats behind windmill power now because of our ridiculous addiction to oil. Amazing that they’re using alternative energy sources for their own digs. The condo elevator, which will run up the center of the missile silo, can only be operated by matching fingerprint. The top floor will be reserved for an elaborate security system. Cameras will be on top to give enough warning of intruders, and response will range from warnings to lethal force. I’m sure they’ll be picking off members of the 99% for the sheer sport of it.

As for the “luxury” of it all, rumor has it that one wealthy businesswoman with two teens is building a unit with top-end appliances in the kitchen, walk-in closets in the bedrooms, a dining room, and two living rooms so there’s no arguments about what to watch on the television. (What? No maids quarters?) Hall even says he’s building one silo for a single individual. He’s waiting for the check to clear.  Hey, that’s a lot of space for one person. Maybe he (or she) should try a dating service. You know, like Survivalist Singles. If you can’t find a match there, try Prepper Dating. Is there anything worse than facing Armageddon alone?

Other floors will be for a pool, a movie theater and a library. (Entertainment is important to the 1%.) Once the calamity hits, whatever it is, and the buyers are on lock-down, there will be floors for a medical center and a school. Unfuckingbelievable. No?

Interested buyers include an NFL player, a race car driver, a movie producer and some famous politicians. I don’t know about you, but the thought of having these asshats as neighbors is very unappealing. What if the Koch Brothers ended up being my next-door neighbors? Even worse, what if I’m the only member of the 99% left in a world of one percenters? For me, a luxury doomsday condo is not an option. (Not that it would be even if I had the money.) I’m a pretty simple person, so I’m saving up for some LSD and a bottle of Tito’s Handmade Vodka. Depending upon what calamity befalls the planet, I’ll decide the best location to sit back and watch the show.