Happy Earth Day From the Koch Brothers and Their Corporate Brethren

Sunday was earth day, and I know this post is late. That doesn’t really matter, though. Although posting this Sunday would have been much more timely, planet earth is in enough trouble that the topic of climate change shouldn’t be front and center for just one day. For the record, I believe that climate change is real. I’m no scientist, but I’ve read enough of the scientific information to know it’s real. I also know something else. Despite what the climate change deniers tell you, there is no disagreement among the scientific experts about climate change. The consensus is that it is real, and that mankind is a major contributor.

Forget for a moment all the talk about experts and scientists. Just use your common sense. The world population is approaching 7 billion people living under a think layer of atmosphere. We’ve been burning fossil fuels (coal, oil and gas) for years. We do this to run our cars and heat our homes. We burn fossil fuels to manufacture products. There are also other man-made factors, like deforestation and urbanization. Do we really think that none of this would eventually affect our climate? Funny thing is that back in 1988, nobody doubted it. Even George H.W. Bush, Dubya’s pappy, understood it. What has happened between then and now? We’ve been played by corporate America. Companies have invested millions of dollars in climate denial front groups working create doubt in the public’s minds, and delay policies and regulations aimed at stopping climate change. Why? I’d like to think I don’t have to spell that out for you. Do the math. It’s all about money and profit.

The other thing you should know is that the majority of these climate change deniers are not scientists, climatologists, or environmental experts. They’re talking heads from think tanks, political strategists, and public relations people. That is not to say that there are absolutely no climate denying scientists. Generally speaking, scientists who are also climate deniers are often bankrolled by corporate America. Is that not the ultimate conflict of interest? Use your common sense again: They’re not being paid to confirm what the experts are saying; they’re being paid to say climate change is a hoax. In contrast, true scientists who have done real studies and models struggle to compete with the deniers. While there may be more true scientists and climatologists, they simply don’t have the funding to utilize the media the way corporate-funded deniers are.

I’m not saying that the Koch Brothers — one of the top ten polluters in the country — are the only ones funding climate change deniers. They’ve been joined by a host of others, including Exxon-Mobil, British Petroleum (now known as BP), and the Western Fuels Association, to name just a few. But like so many other arenas that the Koch Brothers have played in, their investment in climate denial propaganda has been mind-boggling. In fact, according to Greenpeace, the Koch Brothers are “among the most formidable obstacles to advancing clean energy and climate policy in the U.S.” Here are some of the facts that support that assessment:

Between 1997 and 2010, the Koch Brothers funneled about $59.77 million into the climate denial machine. Some of the top recipients include: 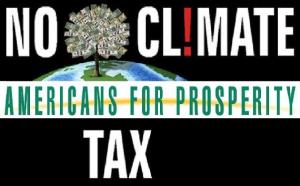 In 2007, the Koch Brothers and others funded ‘junk science’ on polar bears in the form of a non-peer reviewed article claiming that polar bears are not being threatened by climate change. For the record, true science papers are peer-reviewed. This lends credibility to the material being presented. Junk science is not because, generally, the data is, well, junk. In fact, one of the paper’s authors, Dr. Willie Soon, disclosed the source of his funding in the acknowledgments: “W. Soon’s effort for the completion of this paper was supported by grants from the Charles G. Koch Charitable Foundation, American Petroleum Institute, and Exxon-Mobil Corporation.” This should not be surprising. Oil companies and their allies, of course, realize that polar bear protections would hinder Arctic oil explorations. They fully understand that undermining scientific proof of the threat to polar bear populations will delay climate change policies aimed at reducing oil consumption. It should be noted that the co-authors of this paper – Sallie Baliunas, David Legates, and Tim Ball – are notorious climate deniers. It is well documented that Soon and Baliunas receive money from oil interests.

A copy of the Greenpeace report mentioned in this video can be read here on my Scribd site.

Is this who you want teaching your children?

The insidious Koch Brothers, along with Microsoft and other corporations, are planning to turn your children into climate change deniers via a ‘global warming curriculum’ developed for K-12. The idea here is to get them young and confuse them from the beginning, before they develop the ability to question and reason. This will be done through the Heartland Institute, a right-wing think tank. Not surprising, Baliunas, Ball and Legates are all affiliated with Heartland.

The curriculum will present global warming as “a major scientific controversy,” which it is not. In fact, the only controversy comes from the corporate-funded climate deniers. There is no controversy among those who have studied climate change. In fact, there is an overwhelming consensus that it is real and happening. The denial curriculum will be developed at a cost of $100,000 per year by Dr. David E. Wojick, a coal industry consultant. Is Wojick a climate scientist? Absolutely not. His doctorate is in epistemology, a branch of philosophy that deals with the theory of knowledge. Are you kidding me?

The Heartland Institute has released this statement about developing its climate denial curriculum:

We are concerned that schools are teaching climate change issues in a manner that is not consistent with sound science and that is designed to lead students to the erroneous belief that humans are causing a global warming crisis. We hope that our efforts will restore sound science to climate change education and discourage the political propaganda that too often passes as “education”.

The science behind climate change is more than sound. What is not sound is the science behind climate denial. Additionally, the Heartland Institute isn’t the least bit concerned about education. What it is concerned about is delivering the product that their corporate sponsors want them to deliver. I can think of nothing more frightening than corporate entities, such as the Koch Brothers, polluting the minds of American children.

This article concludes with a video from real scientists from reputable organizations whose work is peer-reviewed and whose conclusions about the state of our planet are difficult to deny.

Writer’s Note: For an excellent analysis of the strategy behind climate denial, read Climate Cover-Up: The Crusade to Deny Global Warming by James Hoggan. He is the president of the Vancouver Public Relations firm, Hoggan & Associates. He also runs the excellent website DeSmogBlog, which exposes unethical PR tactics and the people who are working to confuse the public about climate change. Hoggan spoke to Rachel Maddow about his findings a couple of years ago. You can also find a comprehensive listing of climate deniers on DeSmogBlog.

Like Loading...
‹ Another Young Life Lost to Anti-Gay Bullying
The Chicken Little Squad Wants to Gut Social Security and Medicare ›