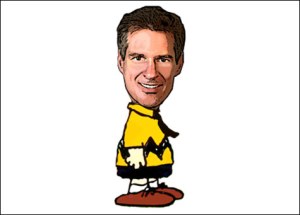 People know what I think of Scott Brown. He’s a bullshitter. I’ve been known to be one too with more than 30 years in advertising. One thing’s for sure. You can’t bullshit a bullshitter. This whole “common man” and “independent” thing is bullshit. He drives around in his little red pick-up truck like he’s a regular guy just like, well, you. That’s bullshit. He’s an independent thinker who doesn’t always tow the party line. That’s bullshit more often than not. And people have made a lot of Mitt Romney’s weasel factor. Here in Massachusetts, we have our own little weasel in Scott Brown. Maybe he should be Mitt’s running mate. Same species.

On March 29th of this year, Brown voted to protect $24 billion in tax giveaways to big oil. On May 8th of this year, he voted to double student loan interest rates from 3.4% to 6.8%. Brown has the typical GOP dismal record on LGBT issues, voting in favor of a Constitutional amendment defining marriage as a union of one man and one woman. In 2006 he was the lone state senator who supported Mitt Romney’s veto of the LGBT Youth Commission, he supports the Defense of Marriage Act (DOMA) and is against the Employment Non-Discrimination Act (ENDA). He refers to LGBT issues as “pet projects.”

Since January 2012, 60% of Scott Brown’s donations have come from Wall Street. Yeah, he’s a guy just like you and me. That’s why he owns six houses, which is twice as many as Mittens owns. He’s a favorite of the infamous Koch Brothers and is even caught on tape at the 2011 opening of the MIT Koch Brothers Cancer Institute groveling for more campaign money:

And have you ever noticed that ethics violations aren’t important when they belong to the GOP? The Massachusetts Democratic Party has filed a complaint with the U.S. Senate Select Committee calling for an investigation into Brown’s use of official Senate staff to create campaign-related materials, and the fact that a Senate staffer flew from Washington to Boston on taxpayer dollars. According to Brown’s campaign spokesman Colin Reed, the complaint lacks credence and is an attempt to divert attention away from questions about Elizabeth Warren’s Native American ancestry. And let’s talk about that little inference from the Brown campaign. In order to distract the voting public from the real issues, the Brown campaign floated a rumor that Elizabeth Warren falsely claimed she is part Cherokee, implying she received some kind of minority status to gain her Harvard teaching job. In an email, Charles Fried, who hired Elizabeth Warren flatly denies this:

“In spite of conclusive evidence to the contrary, the story continues to circulate that Elizabeth Warren enjoyed some kind of affirmative action leg-up in her hiring as a full professor by the Harvard Law School. The innuendo is false,” Fried said.

“I was a member of the appointments committee that conducted that review and presented her case to the faculty. I can state categorically that the subject of her Native-American ancestry never once was mentioned.”

Yet, this issue is critical while an ethics violation isn’t? Give me a break.

Speaking of weasel factors, I’ll tell you what’s critical, though: Scott Brown plagiarizing right off former Senator Elizabeth Dole’s web site to create his own autobiography on his own web site. Of course, he tried to spin that one every which way…including blaming is own staffers for the mistake. What kind of asshat does that? Take a look at the video below:

For the life of me, I haven’t yet figured out why this race is still running so close. Hell, I haven’t figured out how he beat Martha Coakley to begin with. My only conclusion is that the women of Massachusetts are smitten by his rugged good looks (I guess, although as a lesbian he doesn’t do a thing for me). It isn’t his voting record, which is mostly along GOP lines. It isn’t his character, which is weasel-like. Or maybe the pollsters are only talking to the rich little blue blood babes living in the Back Bay right now.

I love my state. We’ve had legal same-sex marriage for eight years now, and have proved all of the critics wrong. We’re on the forefront of a lot of great things. But the voters in this state had better wake up come November, and the progressives had better get out there en masse. Pulling a Rip Van Winkle now is not a good idea.