Home › assault rifles › America and Its Obsession With Guns

America and Its Obsession With Guns 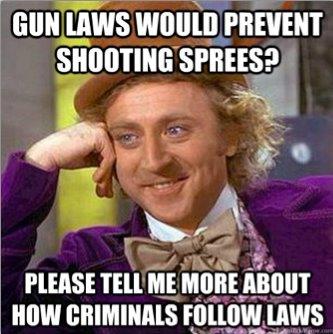 Here we are after one of the worst massacres in United States history and we have a GOP presidential candidate who says we don’t need gun control and a sitting president who is too chickenshit to stand up to the NRA. Indeed, Obama’s response to the Aurora, Colorado killings was to go on record saying he would protect the Second Amendment gun rights. Can somebody help me with this logic?  The perpetrator, who killed 12 people and wounded 58 others carried a 12-gauge shotgun, an assault rifle with a 100-round magazine, and two .40-caliber Glock semi-automatic pistols. Doesn’t sound like a guy who was defending himself. It sounds like a guy intent on killing innocent people. And that’s just what happened. Instead of saying we need “gun control,” Barack Obama is calling it “violence reduction.” This is pure bullshit, people. A couple of things “for the record” here: One, it isn’t just about banning assault weapons. Although, how our elected morons allowed this ban to expire without renewing it is beyond all reason. Nobody…I mean NOBODY…needs an assault weapon. You don’t hunt deer with an assault weapon. You don’t shoot for sport with an assault weapon. What you do with an assault weapon is kill people. Period. Anybody who tells you otherwise is a liar. Plain and simple. Two, let’s talk about this whole Second Amendment bullshit. Here is the actual text of the Second Amendment:

“A well regulated Militia, being necessary to the security of a free State, the right of the people to keep and bear Arms, shall not be infringed.”

We can talk about this a bit. Carrying a gun onto a college campus, for example — like you can in Texas — is not what the Founding Fathers were talking about here. This was intended as a “collective” right as part of a “militia,” which was what existed at the time this amendment came into play. There has been much argument over this amendment, to be sure. Does it mean that an individual has the right to carry any kind of gun, no matter where he or she is? Hard to tell, but I’m guessing the answer is “No.” Here’s how I look at it:

(1) Nobody needs an assault weapon for any reason. Period.

(2) Everyone who wants to carry a gun should apply and should be subjected to psychological testing. Period. People do not need a gun the same day they apply. If there’s someone imminently threatening them, then they need to go to the police.

Since the  latest massacre, we’ve already had the possibility of a copycat killer. This clown was armed with 25 guns and thousands of rounds of ammunition. He wore a shirt that said, “Guns don’t kill people. I do.” He was apparently pissed off because Pitney Bowes fired him. Okay. Guns don’t kill people. People do. EXACTLY. That’s why we need gun control. Screw this “violence reduction” shit. That can mean anything. It’s about “gun control.” That’s why people need to be evaluated prior to them being given guns. That’s why people should not be allowed to purchase ammo and guns on the Internet. Give me a break. Wake up.

It’s amazing to me how the conservatives in this nation think. The Second Amendment means anyone can carry a gun anytime. But when it comes to, say, same-sex marriage, the Constitution and Bill of Rights does not apply in the same way. It’s subject to interpretation. When it comes to taxes, the Founding Fathers intended for only corporations to pay taxes, not individuals. We had no problem amending the Constitution. Now, corporations basically pay no taxes while the taxpayers (and I’m talking about the middle class here) bear tax burden. It all depends upon what suits those who are raking in the dough.

Let’s get serious here: There was no NRA back in the day of the Second Amendment. There is now. The NRA and ALEC was instrumental in the whole “stand your ground” law fiasco because it suited their business purposes. It’s all about making money and maintaining profitability. I don’t understand why Barack Obama is being such a wimp about this whole thing. Frankly, the NRA isn’t going to endorse Barack Obama. It is going to endorse Mitt Romney, the Mitty-come-lately to the while “lifetime member” of the NRA bullshit. In other words, Barack Obama is pandering to a group that has no intention of supporting him in the upcoming election. And, frankly, those who are members so of the NRA are going to vote for the GOP.  Here’s a dose of reality for the politicians and the NRA hierarchy to chew on: A GOP pollster says that even NRA members support laws to keep guns from criminals and other dangerous people…like nut cakes. Why? Because it doesn’t do them any good when crack pots like the Aurora shooter have guns.

Here’s what I expect from Mitt Romney: WHATEVER IT TAKES TO GET INTO 1600 PENNSYLVANIA AVENUE. He will pander to any group that will help him get where he’s going, even if it means forsaking his previous positions on key issues and adopting those that will get him votes. It’s now or never for Mitt. What I expect from Barack Obama is a whole lot more and, as usual, he fails to deliver. I wish I could say I’m surprised, but I’m not. That will be his legacy at the end of the day.

Like Loading...
‹ Is Anybody REALLY Excited About This Election?
A Little Trip to La La Land With Pat Buchanan ›

Leave a Reply to Short Round Cancel reply