Home › ALEC › More News and Notes on the Newtown Massacre

More News and Notes on the Newtown Massacre 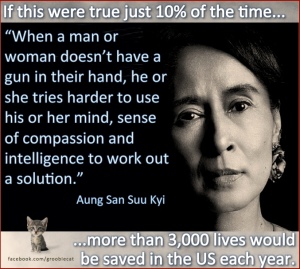 We’re a couple of days removed from the Newtown Massacre, and it is no less horrifying today than it was Friday. As a follow-up, I have posted on my Scribd site a PDF file of the NRA brochure that I mentioned in yesterday’s article on the Sandy Hook Elementary School. I urge you to read it.

Word is out that “Mr. God Hates Fags” himself, Fred Phelps, and his twisted minions from the Westboro Baptist Church, will protest the site of the massacre where 20 children (ages 6-7) and the six adults who tried to protect them were killed. By the way, I found out today that one of the teachers killed in Connecticut was also a Starbucks employee. (I work at the Reading, Massachusetts store.) I found that very distressing, even though I did not know her personally.

According to Phelps, the massacre is God’s way of punishing the state of Connecticut for legalizing same-sex marriage. There are those who say I shouldn’t give this fuckwit any press at all, but the fact is that there is no way I’d ever ignore it. I happen to be gay, and I take personal affront to his sick thinking. I officially consider myself an agnostic, bordering on atheist. But I know one thing. If there is a God, he is not a God of hate as Phelps would have us believe. Bigots like Phelps seek to blame gay people for every horrifying event in American history. This man’s depravity cannot and should not be ignored. In response to Phelps’ announcement,  a hacker group associated with Anonymous has hacked the Westboro Baptist Church site and posted the identity of dozens of its members, including names, email addresses, and phone numbers. All I can say is: God Bless Anonymous. I plan to personally email every single member whose identity is out there. There is now a petition on the White House site to name the Westboro Baptist Church an official hate group. For the record, The Southern Poverty Law Center — an amazing group who deserves whatever donations they can get — has already given them that title, calling the church “the most obnoxious and rabid hate group in America.” Thank you, Morris Dees.

And now, a word about 2012 gun lobby spending

According to the Center for Responsive Politics, the gun lobby has spent heavily in 2012. The NRA has spent $2.2 million through the first nine months of the year. This includes a pack of NRA lobbyists: the C2 Group, Crossroads Strategies, and the Shockey Scofield Solutions, which have lobbied on behalf of the NRA Institute for Legislative Action. The NRA also spent $18 million on the 2012 election either attacking Barack Obama or in support of GOP challenger Mitt Romney.

In contrast, the gun control lobby spent a total of $180,000. This includes The Raben Group, which lobbied on behalf of the Mayors Against Illegal Guns ($150,000) and the Brady Campaign to Prevent Gun Violence ($30,000).

We should also not ignore the influence of the American Legislative Exchange Council (ALEC) in all of this gun bullshit. It is the organization behind the absurd Stand Your Ground Laws. At the ALEC annual meeting this summer in Salt Lake City, the NRA had the largest booth, and also underwrote a shooting event along with one of the largest sellers of assault weapons in the world.

Prayers and Sympathy are not enough

I know I said this in Friday’s post, but prayers and sympathy are not going to change the situation. There will be another Newtown Massacre unless the American people stand up and demand gun control. Signing online petitions is just one small part of what is required. You must write your elected officials personally, or visit their offices, as I intend to do. It is clear that the gun proponents are outspending the gun control proponents by millions of dollars. It will require the American people demanding new laws to make things change.

We should not have to sign petitions to “Protect Our Schools.” The fact is that the Sandy Hook Elementary School just installed new security. It did not matter. It will not matter unless assault weapons are completely banned, and unless the laws are changed to regulate traditional gun ownership. This change in laws must require a complete psychological assessment for any gun owner, as well as access to any past psychological records that may be on file. Privacy be damned. This cannot continue.