Or the column formerly called “The Weekly Ying and Yang.” I’ve decided to take a different approach, primarily because I no longer write that column weekly. And also because there’s far more “yang” than “ying.” Therefore, I believe that the new title gives me more flexibility in both frequency and content. So, without further bullshit, here is the inaugural edition.

WTF is wrong with these Second Amendment wingnuts? 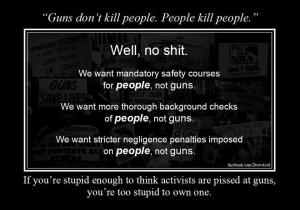 This is a perfect example of people who either can’t or do not want to think for themselves, barely read content, and listen to the bullshit spread on thick with a butter knife by the NRA. I get more petitions a day on my Facebook page about “protecting our Second Amendment rights.” I keep telling people to stop posting that crap on my time line because I’m fully on board with gun control.

And, for the benefit of the wingnuts: Nobody (and I’m talking about the government, or is it gov’ment?) is going to barge into your home and take your damned guns away. Nobody. You’re paranoid. And stupid. The proposed new legislation does indeed call for a total ban on so-called “assault weapons” and high capacity clips. Nobody needs those guns. The only thing they’re used for is to hunt down people and kill them. The law will also require a full background check that includes a psychological profile. Now, if you’re worried about the background check and you’re batshit crazy, you shouldn’t have a gun. Period.

Additionally, the only concept you have about the Second Amendment is, again, the one espoused by the NRA. You need to understand what the Second Amendment is really all about. It was passed in 1791. Do you understand that? We didn’t have AK-47’s, AK-15’s and high-capacity clips back then. We had muskets. And the amendment isn’t there to protect your gun carrying rights while the rights of the innocent to “life, liberty and the pursuit of happiness” are infringed upon. (Oh, by the way, contrary to what the Christian wingnuts want you to believe, God doesn’t want you to carry an assault rifle.)

This obsession with firearms has gone so far off the proverbial track that there is now a group called Sandy Hill Truthers who are spreading the heinous rumor that the whole event never happened. According to these crazy whack jobs, the whole Sandy Hook thing was just a government ploy to take our guns away. For the record, these sad, sorry buffoons are an insult to the families who lost innocent loved ones during that horrible event. Here’s something else for the record: More than 1,300 people have been killed by guns in this country since Sandy Hook. Enough is enough. Just STFU and get a life. Or go shoot yourself in the face.

Can the war on women get any uglier? 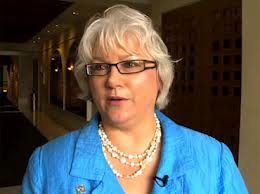 In 2012, 19 states passed 40 new laws restricting women’s reproductive rights. In spite of the fact that women resoundingly rejected the GOP because of this in the November elections, the GOP hasn’t gotten the message. Or it refuses to process that message. According to John Boehner, eliminating “abortion” is now the primary focus of the GOP in 2013. Really?

Probably the most egregious piece of legislation introduced yet (aside from Paul Ryan’s reintroduction of the “personhood” amendment in the new Congress), is one from a crackpot female legislator in New Mexico. State Rep. Cathrynn Brown (yes, she’s a Republican) has filed a bill that would require a rape victim to carry the child to term, or be prosecuted for “tampering with evidence.” According to this nitwit, it will strengthen the laws on rape in New Mexico and help to protect women. Really, Cathrynn?

It never ceases to amaze me how the mysogynistic members of the GOP continue to “spin” their bullshit. What does surprise me is that this latest piece of garbage legislation was proposed by a woman.

If you ladies need some light reading, click here for the Center for Reproductive Rights 2012 report that looks back at the states and the legislation proposed by anti-choice legislators. This little fact book will come in handy for the 2014 midterms. Remember their names. We need send them to the unemployment line.

Is there anybody with more integrity than Senator Bernie Sanders? 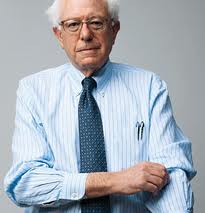 I think not. While the Democrats under the leadership of Harry Reid cut a depressingly watered-down backdoor deal with the GOP on filibuster reform, Senator Sanders stood firm and voted “no.” I got an email from just about every Senator involved in this effort telling me that “some” reform is better than no reform. Blah. Blah. Blah. What it amounts to is the Democrats failing again to stand up to the GOP. They tend to do that a lot. I don’t know, but today’s political landscape reminds me of elementary school sports where teams who haven’t won a game go to the playoffs so that the kids don’t feel bad rather than teaching them that there’s winning and losing in life. Instead of sending the message, “Step aside, GOP. You lost. Majority rules. The people want this stuff done,” the Democrats continue to placate the losers to the detriment of the American people.

I could paraphrase here, but I think Senator Sanders says it best, so I’m including his email verbatim.

This country faces major crises in terms of the economy and unemployment, the deficit, global warming, health care, campaign finance reform, education and a crumbling infrastructure – to name a few. In my view, none of these problems will be effectively addressed so long as one senator can demand 60 votes to pass legislation. The rule changes adopted today are a step forward in making the operations of the Senate more efficient and expeditious. They are not enough.

Most Americans grew up believing that in America the majority rules. That is not the case in the Senate. For many years now, especially since President Obama has been in office, it has taken 60 votes to pass any significant piece of legislation. When Lyndon Johnson was majority leader in the 1950s, he filed cloture to end a filibuster only once. Majority Leader Reid has filed cloture 390 times.

The Senate is not the House and the minority party must be treated with respect and given the opportunity to offer amendments and make their case in opposition. A minority must not, however, be allowed to permanently obstruct the wishes of the majority. That is not democracy. That is a perversion of democracy.

In my view, if a senator or a group of senators are strenuously opposed to legislation they have the right and duty to come to the floor and, for as long as they want, engage in a talking filibuster by explaining to the American people the reasons for their objection. They should not, however, continue to have the right to abuse arcane Senate rules to block a majority of senators from acting on behalf of the American people.

Bernie Sanders stands tall as one of the few politicians who truly has earned the title of “public servant.” He gets it on every level, and he has the welfare of the American people in mind every single day he’s on the job. We’re lucky to have him, but I sure wish he was president. I don’t think he’d take much shit. 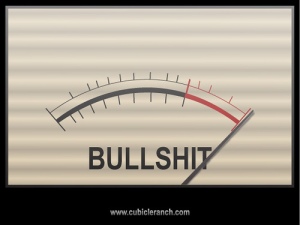 I got an email today from Democratic Senator Max Baucus, chair of the Senate Finance Committee, imploring me to sign the petition to overturn Citizens United. I want to write him a return email that tells him he’s so full of shit I can smell him all the way over here in Massachusetts.

Max Baucus, in case you didn’t know, is one of three U.S. Senators who managed to give the world’s largest biotechnology company, Amgen, a nice little gift in the “fiscal cliff” legislation. This gift took the form of an eleventh-hour loophole giving the company a two-year pass on Medicare cost controls for certain drugs used by kidney dialysis patients. This loophole includes the drug Sensipar, which is manufactured by Amgen. Of course, Amgen isn’t the only company that will benefit from this loophole, but its 74 capitol hill lobbyists worked hard for the scum sucking deal that will cost the American taxpayers a cool half a billion dollars. That’s what I said: Half a billion dollars.

While the loophole doesn’t mention Amgen by name, the company’s chief executive was so thrilled that he made sure to announce it to investment analysts.

Considering the fact that Baucus has received $68,000 from Amgen employees and its political action committee since 2007, the Senator’s email about the evils of Citizens United are a bit – shall we say – hypocritical. He’s arguably the poster boy for Citizens United. Who are the other two senators involved in this travesty? Mitch McConnell, who has received $73,000 from the Amgen stream, and Orrin Hatch who has raked in $59,000. The tangled web of Amgen lobbyists include the former chiefs of staff of both Baucus and McConnell, while Senator Hatch’s current top aide is a former health policy analyst for Amgen.

Throughout the entire “fiscal cliff” fiasco, all we heard was the pissing and moaning of politicians telling us that “entitlements” had to be cut. We had to cut Social Security, Medicare, and Medicaid. Yet, these greedy motherfuckers had no problem extending a freebie to a multi-million-dollar corporation that allowed them to avoid Medicare cost controls. We don’t need to cut entitlements. That’s a bunch of crap. The Amgen deal is what corporate rule looks like. That’s what needs to stop. I’m tired of all this “fiscal cliff” bullshit while these Washington parasites find new and interesting ways to screw over the American people so that the rich can get richer.

So, to all of my politically-minded compatriots out there. Remember this: I don’t like the GOP either. In fact, I can’t find one redeeming quality in the entire lot. But Max Baucus is a Democrat, which only goes to prove that there are misfit, degenerate politicians on both sides of the aisle who are only too happy to feed the unsuspecting American public self-serving bullshit. Here’s good old Max, sending out emails waxing poetic about how corporate rule has to end and the government has to be returned to the people while his actions fly in the face of that political mumbo jumbo.  Add Baucus to the list of dirtbags that should be targeted for replacement, along with Hatch, McConnell, and Boehner.  He’s worn out his welcome in the Beltway.

In closing, I’d like to leave you with a video of a recent Bernie Sanders interview.