Bow, NH, Protest Proves the Power of the Organizing Masses

On Friday, September 28th I took part in a large direct action in Bow, New Hampshire, aimed at shutting down the Merrimack Station Coal Processing Plant. This is being heralded as one of the largest since the Clamshell Alliance was active in the 1970s, with various groups from seven states (New Hampshire, Maine, Vermont, Massachusetts, Connecticut, New York, Pennsylvania) coming together for this single cause. Activists and concerned citizens of all ages showed up and filled many roles in this effort, which was driven by economic, environmental, and health concerns. 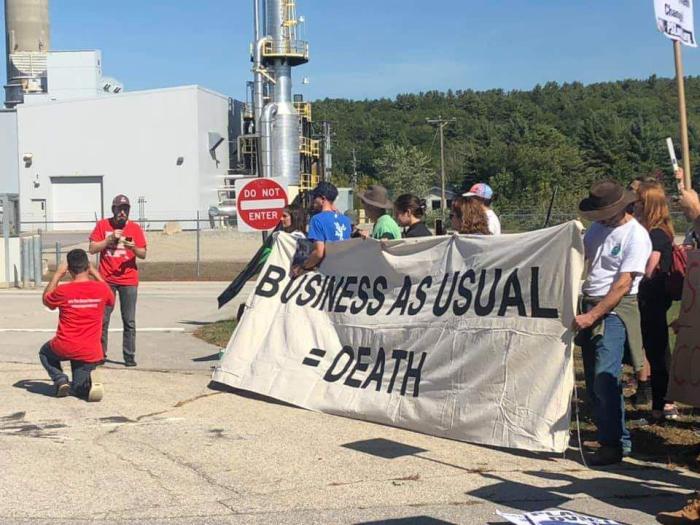 A bit of background

In 2010, the U.S. EPA determined that the Merrimack Station plant was the largest mercury polluter in New Hampshire, producing nearly 200 pounds of mercury each year. Not only is mercury emitted into the air, but also into the river where it works its way into the food chain. According to the Union of Concerned Scientists, just 1/70th of a teaspoon of mercury deposited on a 25-acre lake can make the fish unsafe to eat. In 2008, the plant reportedly installed a scrubber at the cost of $457 million taxpayer dollars, which reportedly reduced the plant’s mercury emissions by 80%. One has to beg the question about how much mercury was being released prior to 2008 if it was deemed one of the state’s biggest polluters after the scrubber was installed. Mercury can cause nervous system problems, digestive issues, and compromised immune systems. Mercury can also adversely affect childhood development. While it is at the top of the list of dangerous contaminants emitted by this plant, Mercury contamination is not the only problem.

Sulfur dioxide is another dangerous contaminant emitted by coal plants. It combines with oxygen and forms acidic particles that can enter the lungs, resulting in asthma and bronchitis. It also leads to acid rain, contaminates crops, and acidifies nearby rivers. Nitrous oxide emissions lead to chronic breathing issues, and make it easier to catch pneumonia and the flu. The soot emitted from the plant exacerbates lung illnesses, and causes heart disease. Particulates in the air from coal plants include lead, cadmium, toxic heavy metals, carbon monoxide, volatile organic compounds and arsenic. As the dust settles, it very likely winds up in drinking water. This means you are now breathing, eating and drinking toxins. Finally, Merrimack Station uses the river’s water to cool the operating system, and dumps the hot water back into the river. This depletes the oxygen in the river, leading to a fish kill-off up to three miles downstream, and has also resulted in an invasive clam species entering the ecosystem.

From a financial perspective, the Merrimack Station plant is far from worth the investment required to keep it operational. Granite Shore Power bought the plant from Eversource in 2017. Since then, the amount of electricity actually produced is just about 2% of New England’s yearly power needs, translating into just 23 working days a year. Basically, the plant almost never runs. The plant is kept functional in the event of an emergency, employing 63 workers from the electrical union. In order to remain operational, the plant receives subsidies of between $20 to $50 million a year, of which $415 million come from rate payers. Instead of keeping a barely-functioning coal plant open, rate payers would be better served by using their money to transition to renewable energy. This would not only protect the environment, but also cost the consumer less money. Since 2009, the cost of both solar and wind power has dropped by 88% and 69% respectively, while the cost of coal power continues to rise.

The Merrimack Station plant produces 238,000,000 MwH of power per year. Based on statistics in a 2018 Forbes article on the cost of moving to solar power, it would have cost less than the power plant’s mercury scrubber to make the transition completely from coal. At the low end of $14/MwH required, the transition would have cost between $3,332,000 to $11,186,000. Yet, the change was never made. One can only assume that this was not in the best interests of those still financially vested in this unhealthy technology. Switching is essentially a no-brainer all the way around.

About the event itself

The night prior to this action, about 100 activists spent the night at a church in Concord, New Hampshire, going over details and plans for the next day. As the group bonded and got to know one another, a well-planned and tactical strategy was discussed, developed, and practiced so that everyone risking arrest could do so with minimal fear and without violence. Unfortunately, private security from the plant successfully infiltrated the meeting – always a risk with such actions – and learned much of what was going to happen before being told to leave. So much for the element of surprise, but that was not a deterrent to the activists. Several groups came to the event to provide a buffet of health food for everyone before, during and after the action. A local legal firm volunteered their time to educate the activists about their rights, provide legal counsel, and ensure legal observers were there to document the event. In short, a lot of people made a conscious effort to unite and pool skills for the greater good. In this respect, the event was a total success.

The next day began with a large rally across from the plant, before we broke into smaller teams with different tactical plans. My team initially intended to occupy the front gate, while two teams attempted to enter the plant with the objective of removing the coal bucket-by-bucket. However, the infiltrators had done their job and there was an enormous show of force by the authorities. The first two groups were met by state, county and local police, as well as a SWAT team and a bomb squad. They were also told that the National Guard had been put on alert. I personally saw military personnel mobilized in the town, but nowhere as much as the police presence inside the protest area. It was a bit shocking, considering the fact that a public statement had been made that all activists were committed to a peaceful event with no physical aggression, verbal abuse, or property destruction. It was our position that the coal was purchased with citizen tax dollars and rate payments, any law stating that the coal cannot be removed for moral reasons was unjust and that the citizens have the duty to disobey an unjust law. Since it had become apparent that the politicians would never refuse lobbyist money and do the right thing, the people decided to do what must be done themselves. 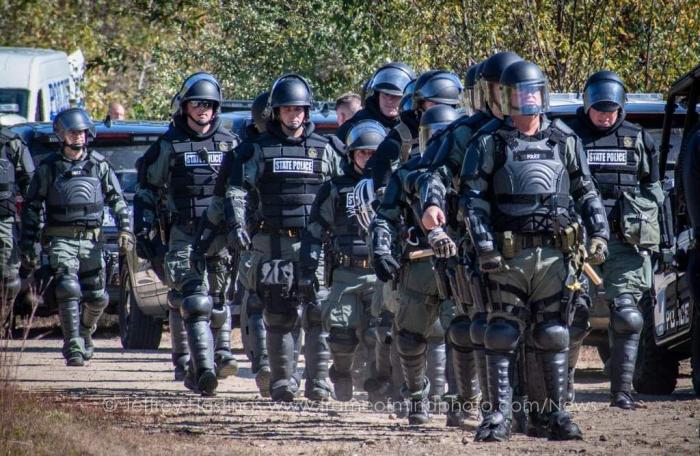 Given the heavy police presence, the first two groups were arrested not long after entering the property. Someone later told me that police in riot gear marched in unison and surrounded what amounted to be about 50 protesters and arrested them without incident or violence. Once this was relayed to those of us at the gate, we huddled and decided what our next step should be. Several of us wanted to wanted to make another attempt to reach the coal, while others were committed to at least stand up to the tyranny and enter the property. While not everyone in my group was willing to be arrested, we all marched to the road which was blocked by two cruisers. We marched between the cars singing songs until we reached the barricade, where we split into two groups. As some crossed the barricade one at a time despite the threat of arrest, others filmed the event and provided support. While we awaited transport to jail, we sang songs and spoke out about why it was so important to us to do this. Eventually, we were loaded onto a school bus that transported us to the local jail.

We only spent a few hours there, but the bonding continued. There were 67 of us being held in a large garage area, so we chose to embody strength and empower one another. We formed a circle and sang songs and danced for well over an hour as they processed us one at a time. Several took turns teaching us the words to various protest songs through the generations. One man spoke to us about his days protesting the Viet Nam war. He explained that it is never the system that offers us additional freedoms or is capable of reforming itself. It has always been the efforts of activists and civil disobedience that makes real change. He touched on the freedom riders during the civil rights movement, the women’s suffrage movement, and the labor movement as examples of citizen actions that brought about substantive change.

We were all eventually released on our own recognizance and fed a dinner at a local church before heading home. New friends and old hugged before parting ways, looking forward to many more actions to continue to shut this plant (and many others) down.

In summary, it’s clear that our elected representatives rarely do what’s in the best interest of the people. The entire system is corrupted by lobbyist and special interest money – in this case Granite Shore Power – and the people simply cannot outvote those dollars no matter how hard they try. There appears to be no intention even now for this plant to be converted to a cleaner, more efficient method of generating power. This is how such actions are born. It is when people finally realize that their government doesn’t work for them, so they must band together to change that paradigm. Nobody is coming to save us. Our government must fear us and what we might do next. We must not be silenced, and we must ensure this is not a one-time event. The time has come for us to remove the coal ourselves, if that is what is required. That is civil disobedience. It is revolution. We must not allow them to instill fear so that we remain on the sidelines watching our own demise as they kill us slowly for profits.

Like Loading...
‹ First Person Singular: My Personal Journey to Revolution
Every Time You Buy From Amazon, You Are Enabling The Surveillance State ›